Fandango! was where me and all my friends went exploring once we had fallen so hard for Eliminator, because it was always the cheapest one for sale on cassette.  A half live, half studio, full party time LP that the band released in 1975 when they were flying high with the success of Tres Hombres, this little beastie just doesn’t seem to get the love supreme.  This is full on ZZ nearing the very Top, as far as I’m concerned, capturing the band at an honest, early stage, before the gimmicks and too much daftness became the order of the day* and you’re getting a kick-ass rock and roll band right up in your grill. 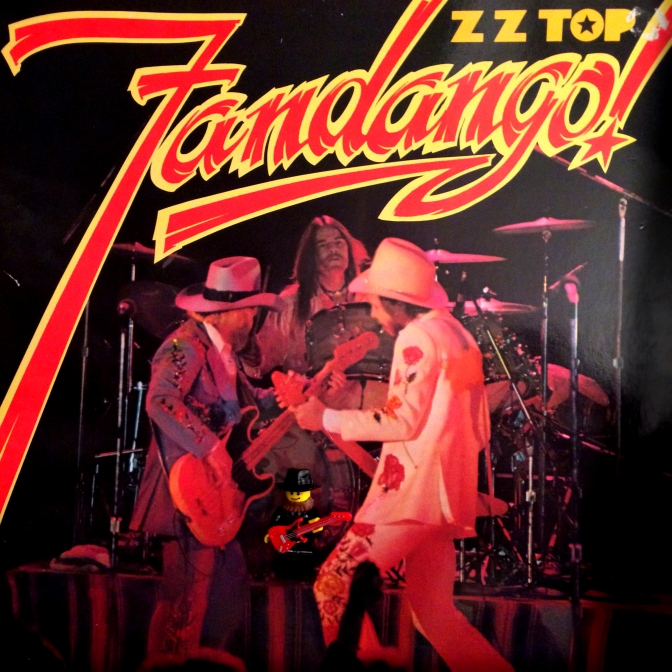 The live side ‘Captured as it came down – hot, spontaneous and presented to you honestly, without the assistance of studio gimmicks’ as it proudly proclaims, opens so damn well with ‘Thunderbird’.  A fast, hard kicking hymn to everybody’s favourite teen tipple it’s incredible – what a set opener! Billy Gibbons’ guitar is just so fast, in your face and perfect, the man is playing for all he’s worth on this one and he’s worth a funky king’s ransom.  Let’s face it who wouldn’t choose to get ‘hi-hi-high’ with them?** 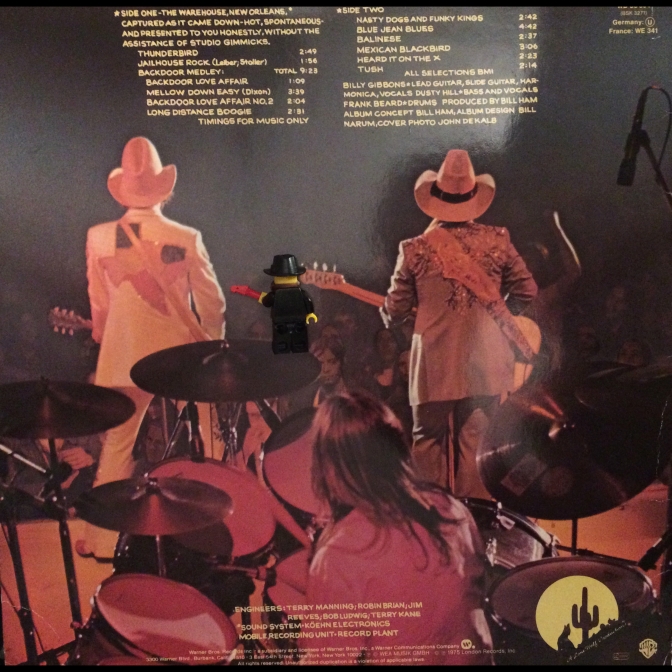 Possibly the reason Fandango! loses some love is the cover of Jailhouse Rock’ that follows and segues into the ‘Backdoor Medley’, don’t get me wrong, it’s all pretty fierce and raucous and ZZ Top do sound like the best bar band there has ever been, but … I could just do without some of the great-if-you-were-there-more-boringer-if-you-weren’t sodding about on the section of ‘Mellow Down Easy’ they play.  It just lacks some brilliance. 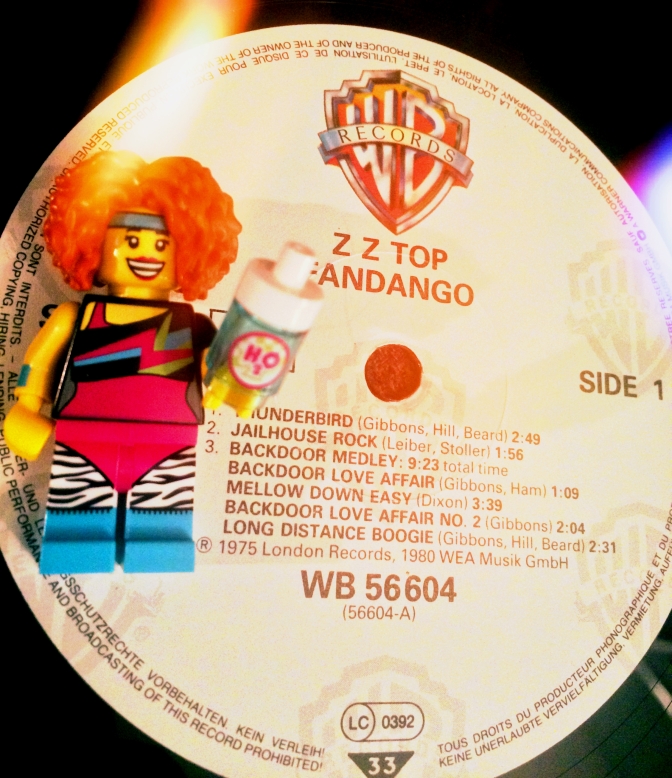 The flip side however has got a couple of the best tracks they ever laid down.  Nothing sums up ZZ Top in their pomp better than ‘Nasty Dogs and Funky Kings’, how can something so powerful just be so damnably funky? I think it’s the same reason that nobody can ever cover them properly, Dusty Hill and Frank Beard were at once a diamond hard and incredibly groovy rhythm section, you play it without that looseness and touch then the whole sound goes.  It’s a great tale of being done wrong by your main squeeze, ‘but what in the world can a nasty dog do but try to get next to you?‘. 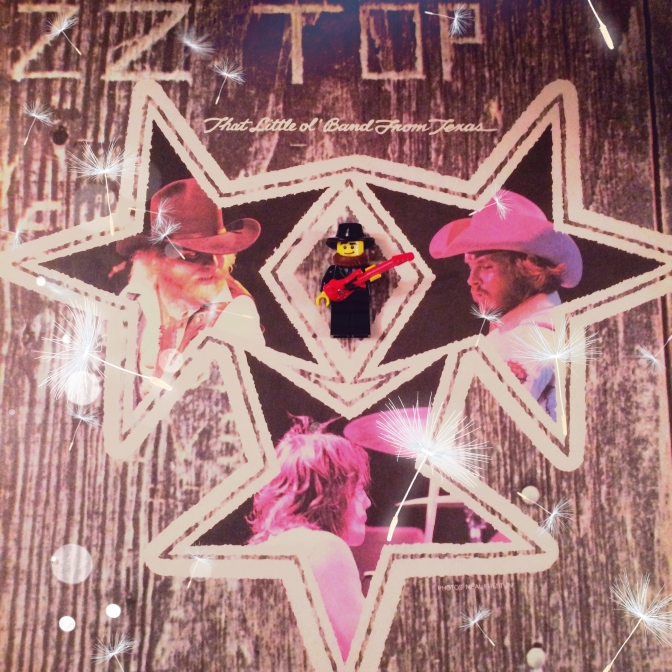 Next up is one of my very favourite ZZ Top tracks ‘Blue Jean Blues’ about finding your ex, umm, baby still wearing your jacket.  Out of all the slow blues they have ever laid down this is my favourite^, Billy Gibbons’ sings it like he really means it and his unfussy, very unhurried guitaring is just perfection – it is all about that feel; Tom Waits and Keith Richards were right about that.  It has to be said here too that Bill Ham’s production on the studio tracks is as brilliant as always, the sound he gets with everything crystal clear and warm 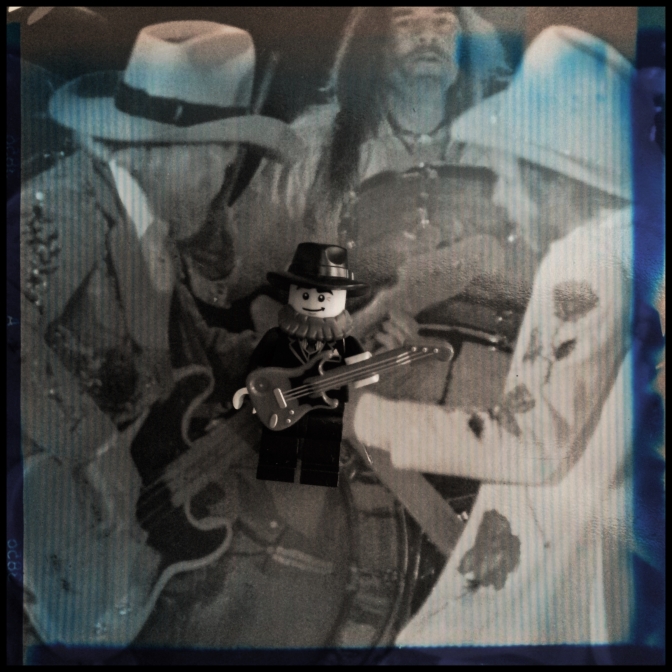 Then we veer towards the good time boogie of ‘Balinese’ about a casino/den of iniquity^* to the ethnosexual-politics-of-another-age-esque ‘Mexican Blackbird’*^, which are fine but definitely the lesser lights here.  Fandango! definitely rallies for a closing 1-2 kick though with ‘Heard It On The X’ and ‘Tush’ – the latter being the only song I have ever sung with a band and thus deserving of a place in the annals of rock history, preferably carved on a stone tablet.  The former is an homage to the border radio that inspired the ‘Top and is just full of jittery, kinetic percussion and ‘lots of watts’ just like the titular radio station, almost new wave eulogy to shortwave:

Do you remember
Back in nineteen sixty-six?
Country Jesus, hillbilly blues,
That’s where I learned my licks.

And do you really need a learned dissertation on ‘Tush’? it’s a hymn to ass, (im)pure and simple.  A measure of just how damn great and bouncy it is^^ is just how many times it has been ripped off by other bands – stand up Motörhead, ‘No Class’ indeed it’s virtually a cover version!

The best thing that can be said about Fandango! is that it puts a smile on my face every time I play it, more than that, it makes me want to move in mysterious ways my dancing to perform.  Just right for January.

PS: the second part of this is just the absolute dogs bollocks!

*gimmicks and daftness which drew me to them in the first place.  I’m a big dumb hypocrite, I’ve got great legs though; oh and I know how to use them.

**although the song fails to encapsulate the full Thunderbird experience as there isn’t an extra verse about waking up without your strides on in your friend’s house face down in your own cold sick; that happened to me when I was riding the Night Train way back when.

^I appreciate this is up against some stiff competition with ‘Sure Got Cold After The Rain Fell’ but it comes out on top by the width of a Rizla.

^*where they pick up 1537 bonus points for rhyming ‘skin-tight pants’ with ‘dance’ – always a favourite over here.

^^the tune, not the ass, or maybe there’s something very clever going on here and it’s both?

26 thoughts on “What In The World Can A Nasty Dog Do?”

Leave a Reply to 1537 Cancel reply