Crom! I’d forgotten how much I loved this stuff! As I’ll happily confess to one and all, after falling in love with The Sisters of Mercy on Top Of The Pops, I was (very) briefly the only goth in West Wales* and after just inhaling their brilliant Floodland LP I began to work my way through their back catalogue.  I was a bit intoxicated with the heady idea of being a bit unfaithful to my first and true love, metal – justifying myself by reasoning that it might help bring a bit of spice back into our relationship.

Poring over their back catalogue in Carmarthen’s best ever record shop, Backstreet Records (R.I.P) I found out there was loads of it to grab hold of too** and I promptly got to ordering as soon as I could work the cash.  The first two I picked up, were the band’s first two EPs Alice and The Reptile House E.P, both from way back in 1983.  I can remember the excitement as I went and picked them up from the nice man in Backstreets*^.

First up, they looked great and, crucially for a tribal dude like me asserting his uniqueness and individuality, they had a cool uniform branding thing going on too; Eldritch was always great on visuals.  The look was right there from the start, black cover^*, central square picture, cryptic messages carved into the run-out grooves (often in German) and on the back the tracks and, more importantly, the Merciful Release logo.  It would serve them very well in the future.  I don’t have any ink on me and I’m glad of that, but I came very close to getting the Merciful Release logo on my arm – it’s cool, it was adapted from a medical text-book but I’m glad I won’t be carrying it on me for all eternity. 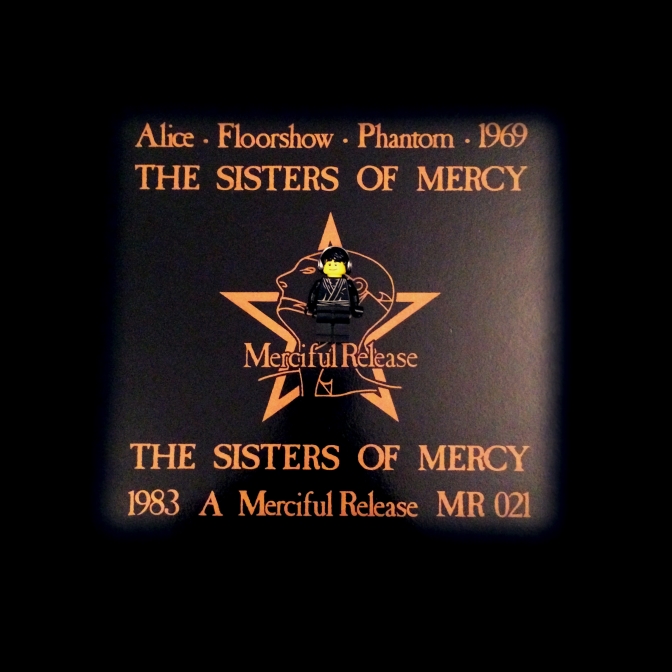 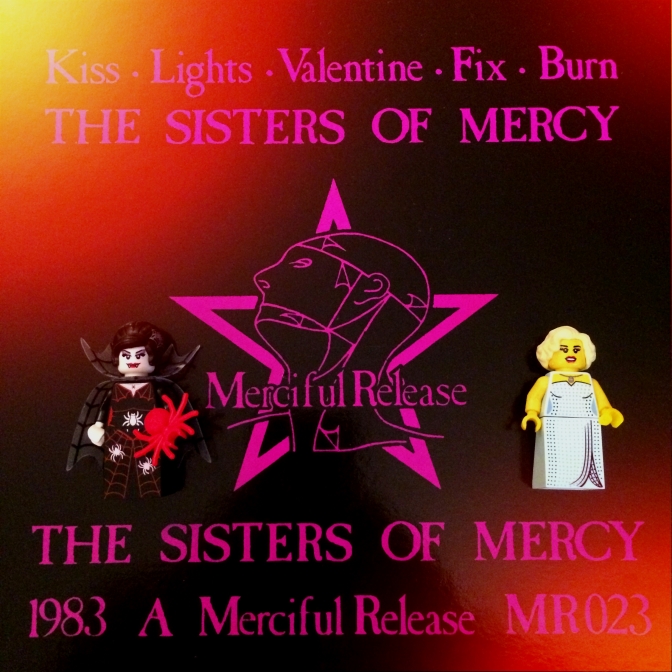 The picture on the front of Alice looks like an intricate golden lithograph of a chick reclining, possibly behind harem-like curtains^.  The title track is just brilliant.  Doktor Avalanche hits the beat and then the guitars mesh and then the bass kicks in driving it all forwards and down, it sounds like a pretty frantic bad trip.  Job done.  Alice is a bit of a naughty girl, screwed up on tranqs and dependent on the person the song is being sung to, this is not good we’re told; there’s a neat strain of voyeurism in here too – silly girl, nice dress, such a shame.  More to the point this track really does rock as much as it, umm, goths courtesy of a great tune and good production courtesy of Psychedelic Furs guitarist John Ashton. 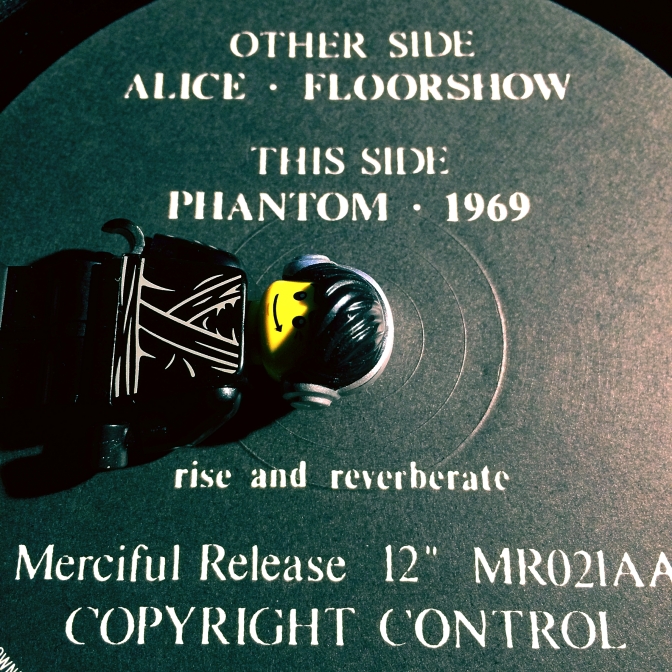 Back in 1983 you got some great VFM when you bought a 12″ and there are three other tracks on Alice.  First up is my favourite, ‘Floorshow’ an amphetamine-fuelled meditation on nightclubs, dancing and fun^.  Eldritch comes on all sneery and aloof about the whole thing (‘Mundane by day inane at night / Pagan playing in the flashing light’) but undercuts it totally by singing it over a relentless beat that is just be perfect to dance to.  His vocals get a bit Iggy at one point too, a bit ragged around the edges.  ‘Phantom’ is a 7-minute instrumental which should have been a 2-minute instrumental.  Then we’re left with a cover of the Stooges ‘1969’ which was the first time I’d ever heard the track and the band, drum machine and all, really do it justice hitting just the right note of psych-out drama-lama-ding-dong.  When I saw The Sisters of Mercy at their 10th anniversary shows in Leeds in 1991, they played Stooges bootlegs over the PA whilst everything was getting set up and finished the night with their cover of ‘1969’.

The picture on the cover of The Reptile House E.P is a dark pink morass that vaguely resembles a temple at Angkor Wat, but it’s so murky it could just as well be my aunt Mabel’s bungalow in Taunton.  It’s not a bad visual analogy of where the music had shifted too.  The tunesmithery is largely gone since Alice and in its place we get an unwelcoming gloomy murk, it’s the Grimpen Mire in aural form.  Eldritch described it as a user-unfriendly, hostile record, it’s deliberately not easy to listen to – I like that concept.  Some of it, I’m talking to you here ‘Fix’ and ‘Lights’ are a real chore but there are rays of (black) sunshine in here too.

Opener ‘Kiss’, its real title is ‘Kiss The Carpet’, is a good case in point.  It takes over three minutes for the tune and vocals to emerge from the gloomyard but when it does it was worth the wait.  We’re all drugged, wasted and doomed and its all her fault!  My fave track is ‘Valentine’, which has a better tune and stark, melodramatic lyrics about suicide (‘The razor bites and the shriek subsides … The man is dead and the razor smiles’), it’s all very teenage – just the sort of thing that you think is wonderfully profound when you’re wandering around alternating between feeling like you’re the forerunner of a new phase of human evolution and an unlovable bumbling, pimply mess with odd-looking genitals^^^.  I love it because it is so daft and serious, plus it peaks rather deliciously towards the end.

The Reptile House E.P ends with ‘Burn’, which is all about a fire in the reptile house (profound, man) which then dissolves into an uncredited reprise of the first track ‘Kiss’ – you see? you’ll never escape the reptile house!  It’s all wonderfully pretentious, but I lapped it up as a teen.  The band’s sound changed pretty shortly afterwards when they hired Wayne Hussey, binning original guitarist Ben Gunn who I assume went straight back to Treasure Island.  Hussey brought with him a good songwriter’s ear for melody and The Sisters of Mercy got rockier and more streamlined.  In fact the standout playing on both of these records is from bassist Craig Adams, he really ups the intensity – he later served with the Mission and the Cult.

There’s a ton of nostalgia wrapped up in these two EPs for me and it is good to come back to them and find that along with all the bits I find pretty gauche these days, there’s a lot of fun and musical merit in there still.  I’ll take that.  Rise and reverberate.

PS: Here’s an interesting clip from producer John Ashton – he mentions Andrew Eldritch’ secret love of Motörhead and AC/DC – in fact a chap I worked with years ago met Lemmy at a Sisters of Mercy gig in London.

PPS – Henry Rollins was very rude about The Sisters of Mercy when I saw him on a spoken word tour.

*maybe I wasn’t and I was just hanging out at a particularly passé graveyard, but I felt like I was and when you’re 17 that’s what counts.

**pre-internet all this was so much harder to find out and I had to wait ages to actually hear the buggers too.  I miss that a little, it kept things veiled and a tad mysterious.

*^sang in a good local band called Lost Patrol, I think his name was Andy; things are hazy, man.

^it’s actually a version of Henri Matisse’s Nude Blue II, but I think I describe it way better

^*you were expecting yellow? get out of here!

31 thoughts on “Alice Kisses The Carpet”