Public Enemy are easily one of the most important groups in my life, at their thunderous best they managed to serve up absolutely cacophony wrapped around the best political lyrics of their time.  They hit all the adrenalin buttons for me I could possibly want, they were clever, cool and irritating; made two of my favourite LPs ever as well.  Much as I know they were a group, I was just obsessed with Chuck D, his lyrics, his delivery and his gravitas were all just second to none; especially when I’ve seen them live.

So, when Chuck went solo in 1996, after Public Enemy’s Muse Sick-n-Hour Mess Age*, I quickly grabbed a promo copy of first single No.  It was absolutely everything I wanted it to be too.  Musically it was built around a funk sample I didn’t know but, most thrillingly, ‘Foxy Lady’ by Hendrix too – the music loped along in the background, a perfect foundation for Chuck to lay the law down on top of.  And lay it down he does.  Chuck** surveys the state of his beloved hip-hop in ’96 and like DJ Shadow wanted to know ‘Why Hip Hop Sucks in ’96’.  You wanna know what’s wrong, let Mr D spell out what’s not happening here for you:

NO mainstream dreams
NO stress beams NO accusations
Cop chases or court cases
NO rape charges NO sarges NO DeBarges
NO lightweight bouts, up in the air
Shoot outs and NO sellouts
NO negros with egos NO mo shows
Callin women bitches and hoes
NO thoughtless flows NO woes
NO singin voices NO Rolls Royces
NO wack choices

NO killers NO vanilla
NO bigger willies NO Wilmas
NO jail time NO fuckin lil kid rhymes
NO studio terrors NO mirrors
Look ma NO spelling errors
NO absent pops, NO sweatshops
NO pork chops 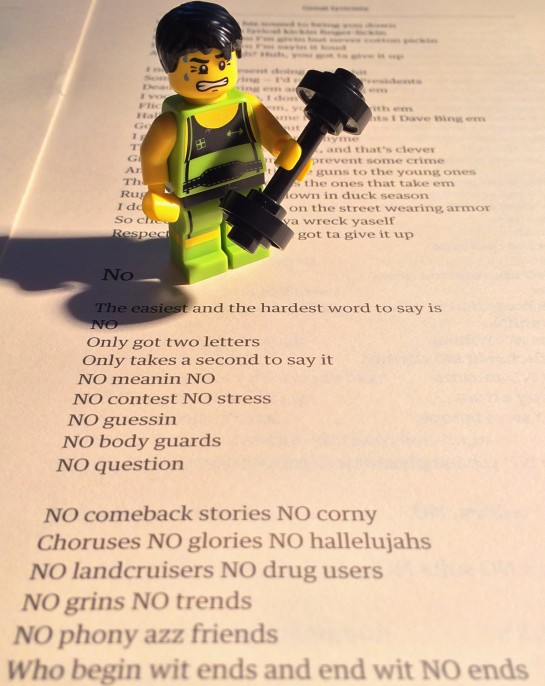 This is a real bold assertion of what he wants hip-hop to lose, in order to regain its’ soul and take the moral high ground back. Chuck is ALL about the moral high ground.  Hell, it’s what I wanted and I guessed I wasn’t alone in that – sadly, people had already worked out that you could never go bust under-estimating the lowest common denominator and the bootys got bigger, the feuds got stupider and the yachts got exclusiver.  Sadly like many prophets (of rage?) before him Chuck’s message may have been necessary, righteous and perfect but it was ignored.  Don’t worry Chuck, it’s us, not you.

Look what I found stuffed inside my copy of No, a booklet on great lyricists that I’d picked up some time in 2008 with my paper, it’s got all the lyrics to ‘No’ of course, along with a few choice others and a brilliant introduction by Kwame Kwei-Armah, the last bit of which I’m going to steal, as I wish I’d written it:

Chuck and PE had shown us that music was not just meant to anaesthetise our minds to the pains of structural inequalities – but to be used, like the best art can be, as a magnificent catalyst for inspiration, debate and change. 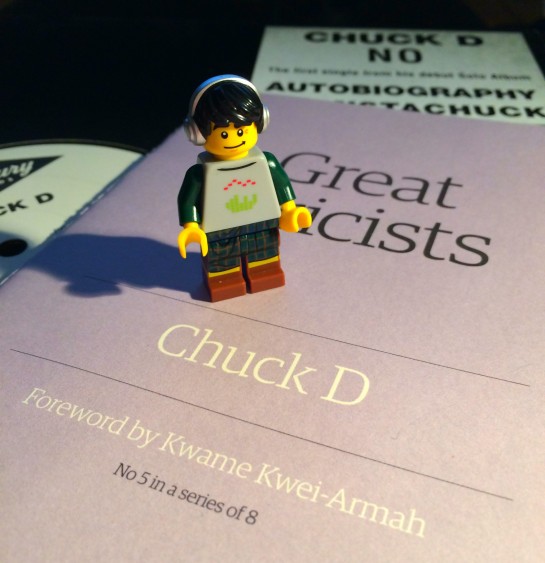 P.S – inspired to dig this little beauty out by Geoff Stephen over at 1001albumsin10years as we’ve yakked about Public Enemy a few times in the last few days.

*appallingly titled as it was, I think it was their last great LP.